Why scoop the poop?

Some would say it’s all in the wrist. Others use a dip and grip method and bend at the knee. A few embrace a two-handed style with a tool in each hand. Whatever the approach, these dog owners share one common title-Pooper Scoopers.

What is a pooper scooper? Anyone who uses a “poop scoop” to pick up an animal’s fecal matter. Poop scoops or pooper scoopers come in many forms from hand-held devices with or without a bag attachment and/or taller, more sturdy broom-collection pan varieties and a little bit of everything in between, including a human hand and a bag. No matter what style you use or the technique you present in the process you are not alone!

Dog owners around the world can unite for one special week-International Pooper Scooper Week April 1-7.

Though the week seems silly to most, its founder, the Association of Professional Animal Waste Specialists (aPaws), is trying to generate public awareness on a growing problem in the world and the consequences of pet waste. The week began in February 2002 by a group of professional pooper scoopers, who want to educate pet owners about the importance of cleaning up after their dogs. Regardless of its April Fools’ Day start, dog feces are no laughing matter.

Related Article: Go Where All Dogs Go! Puppies Need to be House Trained! >>

Dog waste presents serious health and ecological issues when not disposed of correctly or if it is allowed to proliferate in any environment. Simply put, poop attracts flies and gnats and it stinks. Common parasites like roundworm are also transmitted via dog feces. This waste, if roundworm or other parasite eggs are involved, can remain in the soil for years, infecting anyone who comes in contact with it. Infection poses a greater risk for children who play in the dirt and transfer the parasite via contact to their mouth or eyes. However, adults can also be at risk if a friendly game of football or catch happens in a soil-infected area.

Dog feces also provide one of the leading sources for E. coli bacteria. One statistic showed one gram of “dog doo doo” can contain over 20,000,000 E. coli cells. While one dog is not a strong threat, “the combined effect of thousands of dogs and cats in a metropolitan area can create serious problems due to contamination of soil and water supplies,” according to gone-ta-pott.com.

The federal government has also realized the hazard of dog waste for a community. In 1994, the Environmental Protection Agency (EPA) named pet waste as a major contributor to Nonpoint Source Pollution (NPS). Its findings cite how the “run-off from pet waste will continue to produce harmful effects on our drinking water supply, recreation, fisheries and wildlife” unless dog owners and community members work “to reduce and prevent this pollution” at the start.

Three years ago, the American Pet Products Manufacturers Association, estimated 62 percent of U.S. households owned 78.2 million dogs. This number is expected to rise and contribute more to the existing problem. What does that number translate into in terms of doggie doo? The American Pet Association estimates pet dogs produce more than 4.4 billion pounds of poop per year. The graphic image to explain what this volume looks like would fill 900 football fields with 12 inches of dog waste.

Responsible dog owners make sure to pick up after Fido or Lady have done their job, especially when the feces are deposited in common areas like parks or dog runs. Pet parents must also be vigilant to police their own neighborhoods and backyards. Of course, professional pet waste specialists can also be employed to do the job as well.

Large cities and even smaller communities are seeing the need to limit pet waste and make owners pick up. New York City placed legislation in effect years ago requiring dog owners to clean up after their pets. The problem of dog feces’ contamination is so great in Germany, a citizen commission in 2005 recommended creating a DNA database at pet licensing to provide sanitation workers with a verifiable pool to prosecute offenders, resulting in a fine equivalent to $600 in U.S. money. So far this idea does not seem to have been implemented.

For do-it-yourself poop scooping operations, many products can do the job without fuss or mess. Poopy Scoopy by Cygany, Inc., provides two, long-handled tools - a bucket and shovel - for easy pick up.

So the long and short of it goes back to one idea - responsible dog owners scoop up the poop daily, regularly and dependably to keep their neighborhood, city, state and country a better place. 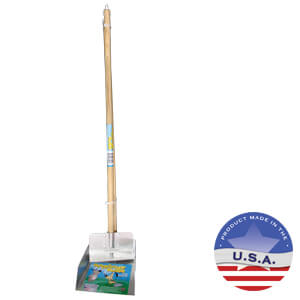 Poopy Scoopy Bucket and Shovel
Your Price: $15.99
In Stock
The information contained in The Well Pet Post articles is not intended to replace a one-on-one relationship with a veterinarian and is not intended as medical advice. If you have a health con­cern about your pets, please consult with an appropriately-licensed veterinarian. Never dis­re­gard pro­fes­sional veterinary advice or delay in seek­ing it for your pets because of some­thing you have read on this blog or in any linked materials.