“Cattle, goats, and sheep are the most common animals involved in transmission though many other species can become infected including pets and wild animals.”

Q-fever is a disease referred to as zoonotic. This means that it is transmitted between animals and humans. This disease is caused by a rickettsia called Coxiella burnetii a bacteria-like agent. Periodically at barn sales and fall fairs or by drinking unpasteurized milk, Q-fever, also called coxiellosis or abattoir fever, has been transmitted to the public. Cattle, goats, and sheep are the most common animals involved in transmission though many other species can become infected including pets and wild animals. Those people in close contact with livestock such as veterinarians, abattoir workers, and farmers are at highest risk. This agent is found globally and is quite resistant in the environment surviving dry hot conditions and will withstand some of the commonly used disinfectants. Raw milk, urine, and bowel movements of infected animals can all be contaminated. Particularly of concern is contact with birthing fluids and tissues from animals since the agent is present in high concentrations there. Humans are quite susceptible to Coxiella and it does not take many organisms to cause illness, actually just one! Breathing in infectious particles in dusty barnyard air will allow transmission of the disease agent also.

When people get Q-fever a range of signs may occur. Often infections do not produce symptoms but in others flu-like symptoms are seen a few weeks after exposure. Classic flu-type symptoms progress to pneumonia in about one third of these cases and sometimes the liver is affected. Once a person has a bout of Q-fever, a serious chronic form can recur years later sometimes causing heart infections (endocarditis), but usually these individuals are immune compromised or have pre-existing heart problems. Animals may not show any overt signs that they are infected but sometimes the disease causes abortions in sheep and goats and rarely in cattle. This makes it difficult to identify animals carrying the Coxiella organism. For these reasons it is good to know about this disease and take precautions when near livestock. Common sense prevention measures include: 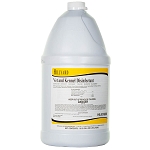 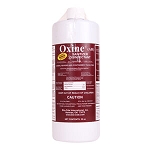 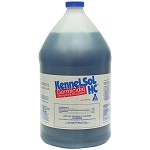 KennelSol HC Germicidal Detergent & Deodorant, Gallon
Your Price: $69.99
To order multiple quantities, contact customer service.
The information contained in The Well Pet Post articles is not intended to replace a one-on-one relationship with a veterinarian and is not intended as medical advice. If you have a health con­cern about your pets, please consult with an appropriately-licensed veterinarian. Never dis­re­gard pro­fes­sional veterinary advice or delay in seek­ing it for your pets because of some­thing you have read on this blog or in any linked materials.