Parasite Control in Sheep and Goats

“The parasites that cause the most damage to sheep and goats are stomach worms and coccidia.”

Sheep and goats are very susceptible to worms because of their close grazing behavior and slow-to-develop immunity. Goats are more susceptible than sheep when forced to graze (versus browse). All sheep and goats have worms. The parasites that cause the most damage to sheep and goats are stomach worms and coccidia. Stomach worms can cause substantial loss in sheep and goats if left unchecked. The barber pole worm (Haemonchus contortis) is the stomach worm of primary concern. It is a microscopic blood-sucking parasite that pierces the lining of the abomasum (the ruminant's "true" stomach) and causes blood and protein loss and anemia as evidenced by pale mucous membranes (lower eye lid gums etc.), and/or "bottle jaw" an accumulation of fluid under the jaw. The barber pole worm is difficult to control because it has a short direct life cycle, is a prolific egg producer, and can go into a hibernating state until environmental conditions are more favorable for its life cycle. The barber pole worm likes warm, moist conditions. The small brown stomach worm (Ostertagia circumctinca) is the stomach worm of secondary concern. It also burrows into the wall of the abomasum. However, unlike the barber pole worm it causes digestive upset and scouring (diarrhea) in livestock.

Since the primary mode of transmission for stomach worms is grazing, pasture management is an important aspect of controlling internal parasites. Pasture control strategies include the use of clean or safe pastures, mixed species grazing, and pasture rotation. Examples of clean pastures include those which have not been grazed by sheep or goats for six months or more, those which have been grazed by cattle or horses, fields in which a hay or silage crop has been removed, fields which have been rotated with row crops, and fields which have been newly planted or renovated. Pasture rotation will help to control parasites in small ruminants but only if the pastures are rested sufficiently - at least 70 days since the last sheep and/or goats were on the pasture. In extreme cases where pastures are so severely contaminated, zero grazing (confinement) will offer relief from stomach worms.

Anti-parasitic drugs called "anthelmintics" should be used wisely and sparingly to control internal parasites in sheep and goats. Frequent use of anthelmintics will enable the worms to become resistant to the drugs. It is also costly and may lead to a false sense of security. Sheep and goats should be dewormed strategically. The most important time to deworm a sheep or goat is prior to birthing. When a ewe/doe lactates, her immunity to parasites is compromised. She is also the primary source of infection to her newborn lambs/kids. Deworming ewes/does prior to turning them out to spring pasture is also a good strategy because it helps to reduce the contamination of the pasture as the worms resume their life cycle with the onset of good weather. Some veterinarians have advocated multiple anthelmintic treatments in the spring to control the "summer" explosion of worms that occurs in a normal rainfall year. Deworming the flock in the fall after the first frost is also a good strategy since this is the time the worms will go into a hibernating state. Sheep and goats should be dewormed prior to moving to a clean pasture. Fecal egg counts may also be used to determine when the flock needs dewormed. Producers can learn to do their own fecal examinations or they can take samples to a veterinarian or a state diagnostic laboratory.

All sheep and goats have coccidia. Coccidia are single-cell protozoa that damage the lining of the small intestines. Since the small intestines is where nutrient absorption takes place, coccidiosis can permanently stunt lambs and kids. Coccidia are species-specific meaning the coccidia species that affect sheep and goats are different from those that affect poultry and rabbits. Coccidia cause weight loss and ill health in lambs/kids and diarrhea which may be streaked with blood or mucous. Affected lambs/kids may become weak and dehydrated and die. Whereas stomach worms are more of a problem with sheep and goats on pasture, coccidia are more of a problem in sheep and goats that are in confinement or under intensive grazing systems. Outbreaks of coccidiosis are caused by poor sanitation, overcrowding (or overstocking), and stress. Consequently, coccidiosis can be controlled by good sanitation, clean water, not feeding on the ground, and not overstocking pens and pastures. Disease outbreaks can be prevented by administering Corid in the water supply.

Internal parasites of lesser concern are tapeworms and lungworms. Tapeworms which are visible in the manure are generally non-pathogenic though they can cause weight loss and death in extreme cases. Tapeworms can be controlled by administering an anthelmintic from the benzimidazole family such as Safeguard. Sheep and goats become infested with lungworms when they consume larvae from the pasture and the larvae travels to the respiratory system. The symptoms of lungworms are not easy to recognize and only in extreme cases do lungworms cause severe respiratory distress. The same drugs which control stomach worms will also control lungworms.

Sheep and goats may also get external parasites. The sheep tick is called a "ked" and it can substantially decrease pelt value. Goats are more likely to get mange mites and lice. Sheep and goats with "snotty" noses may have nose bots, a parasite that gets into the nasal passages. These various biting parasites can be controlled by administering an anthelmintic such as Ivomec Sheep Drench. 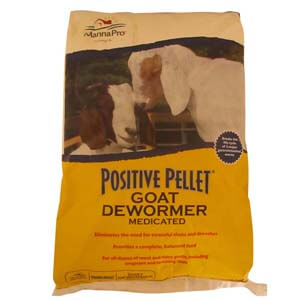 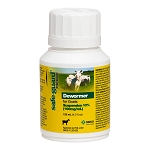 Safe-Guard Suspension 10%, Goats
Your Price: $31.99
In Stock
The information contained in The Well Pet Post articles is not intended to replace a one-on-one relationship with a veterinarian and is not intended as medical advice. If you have a health con­cern about your pets, please consult with an appropriately-licensed veterinarian. Never dis­re­gard pro­fes­sional veterinary advice or delay in seek­ing it for your pets because of some­thing you have read on this blog or in any linked materials.