“Many things can terminate pregnancy including genetic abnormalities, malnutrition, stress, steroids, and poisons.”

After a cow or heifer is bred, she should calve about nine months plus one week later (283 days on average). But sometimes accidents of gestation terminate pregnancy early or other factors (disease or toxins) kill the developing calf. Immediately after conception when the tiny embryo is traveling down the fallopian tube into the uterus it is safe from harmful influences. After it reaches the uterus a few days later however it becomes more vulnerable to problems. The conceptus is called an embryo during the first 45 days of pregnancy; after that all the major organs and body systems have been formed and it becomes a fetus. If loss occurs before 45 days of gestation it is termed early embryonic death.

Many pregnancy losses in early gestation take place without being noticed since at that stage the embryo or early fetus may be reabsorbed by the cow's body or isn't large enough to be seen if it is expelled -- simply coming out with fluid from the uterus. If the loss occurs quite early the cow comes back into heat again and you may just think she didn't settle. In hot weather for instance, embryos are sometimes lost during the first week after mating; the embryo fails to attach to the uterus. If the embryo dies after it has attached to the uterine lining and the pregnancy has been recognized by the cow's body it may be longer before the cow comes back into heat.

The second phase in which pregnancy loss occurs is from about 45 days up to about 60 to 80 days. During this time heat stress can also cause pregnancy loss especially in a hot humid climate. A cow bred in May or June that goes through severe heat during July or August may end up open because of early loss -- due to high temperatures. Another reason for pregnancy loss in this period is occasional miscommunication in hormonal signals between the growing embryo and the uterine tissue that will become the placenta; the CL (corpus luteum) on the ovary may not be maintained. The CL is an important key to continuation of pregnancy because it produces progesterone -- the hormone that is crucal to pregnancy. If the level of this hormone drops too low the cow will come back into heat and lose the pregnancy. Once she's past 60 days however the pregnancy is considered safe from hormonal changes because the CL remains on the ovary and keeps progesterone levels high. But she is still vulnerable to other causes of pregnancy loss the most common being some type of infection.

Many things can terminate pregnancy including genetic abnormalities, malnutrition, stress, steroids, and poisons. Some genetic defects kill the conceptus early on while others create abnormalities that make it impossible for the fetus to survive outside the uterus and it dies shortly after birth.

If cows are severely underfed during early pregnancy they may reabsorb or abort. Malnutrition (inadequate or unbalanced diet) may also make a cow more susceptible to other problems -- including any infectious diseases she is exposed to -- and some of these may cause death of the embryo or fetus.

Some abortions in late pregnancy are due to injury or stress. Severe stress of any kind triggers production of cortisol which is a natural steroid that can cause the cow to go into labor. Some people worry that injury (falling down, being jammed in the belly by another cow, etc.) might hurt the fetus and cause an abortion but the fetus is very well protected from bumps and jolts since it is floating in the uterus in fluid. Usually if a cow aborts following an injury it is the stress from pain inflammation blood loss etc. that triggers abortion (due to the body being flooded with cortisol) rather than the injury itself.

High fever can make a cow abort. If she has a fever higher than 106 degrees for very long this makes the uterine environment too hot for the developing embryo or fetus. If a cow is sick she might abort anyway (due to stress) but it is always worth trying to treat pain and fever in hopes of saving the pregnancy. Treating with Banamine (which will not have adverse affects on the fetus) can help reduce pain fever and inflammation and thus reduce the stress she's experiencing and reduce the risk for abortion -- and is safer to give than dexamethasone.

Poisons like iodine can also be a cause of pregnancy loss as can toxins in certain plants. Loco weed may cause abortion at any stage of pregnancy. Broomsnake weed also contains toxins that can cause abortion. Ponderosa pine needles are a common cause of abortion during winter if cows eat them when feed is short or covered with snow. These "pine needle abortions" generally occur from six to nine months of gestation (last trimester). The calf may be born alive if it's close to full term but is usually weak and small and may die soon after birth.

Abortion can also be caused by eating moldy hay or silage. Some molds are dangerous to the fetus during the third through seventh month whereas Aspergillus usually causes abortion in the last trimester. Molds are thought to cause between three to 10 percent of abortions in cattle. There are often some gray-white thickened patches (that look like ringworm) on the aborted fetus and on the placenta. Much of the placenta is discolored (gray, yellow or red-brown) and the cotyledons ("buttons") are usually thick wrinkled or leathery. 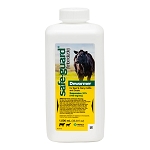 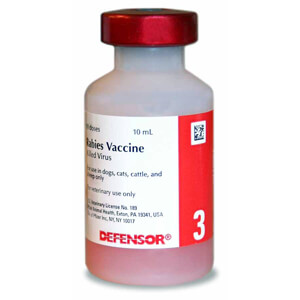 Vanguard Rabies 3 year
Your Price: $26.99
In Stock
The information contained in The Well Pet Post articles is not intended to replace a one-on-one relationship with a veterinarian and is not intended as medical advice. If you have a health con­cern about your pets, please consult with an appropriately-licensed veterinarian. Never dis­re­gard pro­fes­sional veterinary advice or delay in seek­ing it for your pets because of some­thing you have read on this blog or in any linked materials.