Learn About The Heartworm Life Cycle » “Ironically, heartworm disease in felines affects the lungs more than the heart.” 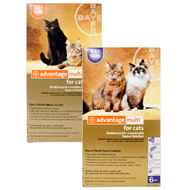 A once-a-month topical solution for the prevention of heartworm disease.

Do you want the good news or bad news first?

Heartworm disease in cats presents a mixed bag of positive and negative information and consequences for felines. Much like dog owners, households with cats should also take special precautions in keeping kitty healthy and strong.

The good news for cats centers around, well, being a cat. Heartworms are adapted primarily to live in dogs and other wild animals. The disease is less common in felines because a cat is not a natural host for the parasite, Diroflaria immitis. Statistically, about one cat will develop heartworm disease compared to every 10 dogs that will get it.

Some experts speculate heartworms have the genetic means to survive in a dog's body, but the immune system of a cat finds and destroys the larvae more easily. One example gave this statistical explanation for the process: If 100 heartworm larvae infect a dog, 75 adult worms would develop. If 100 heartworm larvae infect a dog, only 3-10 heartworms would develop. Still, this limited number of parasites would cause serious health problems in the animal.

The mosquito is the culprit for delivering the larvae to a cat, which it delivers through a bite. Outdoor cats or cats who spend time outside are at higher risk, but indoor cats can also contract the parasites since it only takes one infected mosquito bite. Remember, mosquitos can and do bite humans and animals inside the home too.

What are heartworms and heartworm disease, exactly?

The cycle to produce heartworms in both cats and dogs requires several players and events, but none of it would be possible without the mosquito. Adult female heartworms living in an infected dog, fox, coyote, or wolf produce microscopic baby worms called microfilaria, which circulate in the bloodstream. When a mosquito bites an infected animal for a blood meal, it picks up these tiny worms. Now, living inside the mosquito, these baby worms mature into “infective stage” larvae in about 10 to 30 days. Ready for another meal, the mosquito will pass on these infective larvae when it bites another dog or wild animal. Via the bite wound, the infective larvae will enter its new host after being deposited on the surface of the animal's skin, taking about four to six months to develop into adult heartworms.

When an infected mosquito bites a cat, kitty's immune system attacks the heartworms and many die. The few worms that do survive, however, travel to the feline's heart, pulmonary arteries and blood vessels of the lung. In cats, the dying worms and the few living ones can create major inflammatory and immune problems, primarily associated with the lungs and respiratory system.

Bad news: What heartworms do to a cat's heart

Ironically, heartworm disease in felines affects the lungs more than the heart. This occurs primarily due to the blockage of the arteries in the lungs. Because a cat is smaller than most dogs and its immune system attacks the parasite more aggressively, each surviving worm can create more internal damage to a cat.

Both living and dead heartworms pose risks to cats for several reasons. Live heartworms migrate to the heart and the arteries towards the lungs, causing inflammation. This may block the artery and damage lung tissue. Breathing and respiratory problems result for a feline. Due to a cat's immune response to a heartworm, even a dead and decaying one will irritate the lungs and may increase the inflammation, making the infection broader and more acute.

Veterinarians have labeled the signs related to lung inflammation as HARD (Heartworm-Associated Respiratory Disease). Heartworm disease in cats can be misdiagnosed as asthma, bronchitis and other respiratory problems.

Diagnosis and Symptoms of Heartworm Disease in Cats

Cats with heartworms may cough, wheeze, have difficulty breathing, vomit, and exhibit lethargy or weight loss. Other signs can include diarrhea, tachycardia, dyspnea, (respiratory distress), anorexia, and chylothorax (lymph fluid buildup in the chest cavity). Many signs may be mild in most, but some cats may develop extreme responses, such as congestive heart failure. Sudden death, as a result of the disintegration of a dead heartworm, is also a possibility.

A physical examination by a pet care professional will most likely not reveal the possibility of heartworms. For vets, diagnosing heartworm disease proves challenging because its symptoms vary. No definitive test exists for cats in determining the presence of this parasitic worm. Generally, veterinarians depend on antibody and antigen tests to determine heartworm disease, though several other blood tests may also be used.

Heartworm Antibody Test: This test verifies if a cat's immune system has been exposed to heartworms. While a positive test may indicate a feline has an active infection, cats that have had heartworms which have since died will also test positive due to antibodies in their blood. Experts believe these antibodies remain in the blood for two to four months after the heartworms have died. The antibody test may also indicate the presence of late stage larvae, not yet adult worms, and adult heartworms located in places other than a cat's heart.

The sensitivity of this test provides a strong indication for heartworm disease. If this test is positive, a heartworm antigen test should follow it for a more complete diagnosis.

Heartworm Antigen Test: In the simplest explanation, this test determines the presence of adult female heartworms. However, while very precise its results can be misleading. A positive test indicates heartworms are present, but a negative test does not always mean an absence of the parasite. Two adult worms must be present in a feline to make this test positive, but a lesser number or worms, which have not yet reached maturity, may be inside their cat host.

Two positive results from the Antibody Test and the Antigen Test generally confirm the diagnosis of a heartworm infection for a cat.

Blood work: A feline blood sample may be tested for the presence of microfilariae, but a cat's immune system generally fights off these offspring. Less than 20% of cats with heartworms show signs of this larvae. Examination of blood through a microscope seldom reveals these larvae in cats because of their body's ability to attack the parasite. A negative test may not mean heartworms are not present though a positive result would provide a strong indicator.

Veterinarians can also look for eosinophils or basophils (signs of infection) in the blood in abnormally high levels. This can also be a sign of heartworms in cats, but it can also be a mark of something else.

Chest X-rays: This will allow a vet to view and measure the size and shape of the heart and the pulmonary arteries. If these appear enlarged, twisted, or inflamed, the pet doctor may strongly suspect heartworm disease in the cat. A trained professional must analyze the x-rays since the changes may be subtle and minimal, especially early in the infection.

Ultra Sound/Echocardiography: This process allows a vet to directly examine the internal structures of the heart and the surrounding vessels. In rare cases, adult heartworms can be seen, confirming the presence of the parasite. However, this is an unusual result since cats harbor such a low number of worms.

Here lies the worst part about heartworm infection in cats. There are currently no products approved in the United States to treat feline heartworm disease. What treatments are approved for dogs (immiticide) are toxic to cats, so this is not an option.

However, the good news for many infected cats is their ability to out live the worm's life expectancy (about two to three years) and fight off the infections. Veterinarians can prescribe some treatments to tackle the symptoms of heartworm disease as well.

Prevention Is the Best Medicine

Untreated heartworm infection with adult heartworms frequently causes death in cats. For conscientious cat owners, a number of precautions can help keep heartworm disease out of the picture.

First, keeping a cat inside decreases, though does not eliminate, the chance of getting heartworms. A study by the American Heartworm Society showed about 25% of the cats that tested positive for heartworms were considered "indoor cats." With that in mind, the best scenario is to administer heartworm preventative products monthly and year-round, even in more northern regions of the world.

Several FDA-approved medications can help prevent feline heartworm infection. Administration can begin in kittens as early as six weeks, especially if a cat may have been living outside after its birth. Make sure the medication is approved for cats and not dogs since cats cannot tolerate as many of the same compounds as a dog. DO NOT USE A DOG'S HEARTWORM MEDICINE ON A CAT.

U.S.A approved heartworm preventative products and their active ingredients include:

Not sure what product would work best for you? Consult with your vet to get the best possible product for your feline.

Recommendations call for testing a cat for heartworm disease prior to administering preventative medication though. As always, consult a vet about the best options for testing for any feline.

In the end, it can be all good news for kitty if its owner takes the time and initiative to keep heartworm disease and risk far away and gets the real scoop. 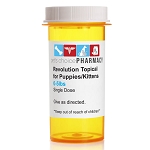 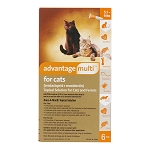 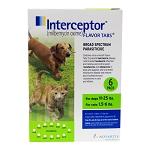