“Examinations by a veterinarian are crucial to determining the extent of the injury and how well it is healing.”

Over time, horses with DSLD develop suspensory ligaments that do not properly support the fetlock joint. Without proper support from the suspensory ligament the fetlocks drop and the pasterns flatten out until they are nearly parallel to the ground. The resulting conformation is known as coon-footed. The dropping of the fetlock causes the distance from the hip socket to the fetlock to increase and as a result straightens the limb structure. Wide open angles at the stifle and hock, such as these, are known as post-legged structure. As DSLD progresses, the horse becomes more and more post-legged and coon-footed.

A horse with DSLD develops an abnormal response to normal stresses placed on the suspensory ligament. Ligaments are fibrous flat structures that join two bones together. Under normal stresses the collagen fibers in the ligament can tolerate tiny tears and strains. In a healthy horse these minor injuries are repaired with newly manufactured collagen but horses with DSLD have abnormal healing responses. The afflicted horse fails to manufacture this new collagen and instead heals the ligament injury with cartilage.

The result of this improper healing is a loss of strength and elasticity. The ligament enlarges, hardens, and is unable to permit normal weight-bearing strength. This degenerative breakdown gradually leaves the ligament prone to severe injury.

What Horses are Predisposed to DSLD?

Although this question has been surrounded by many differing opinions, the general opinion is that horses with DSLD are generally believed to have a genetic predisposition to the condition which is prevalent within certain breeds but even more so in certain bloodlines within those breeds.

What are the Symptoms of DSLD?

A horse afflicted with DSLD will generally experience bilateral (both front or hind legs) lameness and painful response to examination of and pressing on the branches of the suspensory ligament. Swelling and "sinking" of the fetlock are also symptoms in horses with fairly advanced stages of the disease. Enlargement and hardening of the suspensory ligament will also be noted upon palpation and horses are likely to exhibit obvious signs of pain.

As the disease progresses, the fetlock will appear closer to the ground, the pasterns closer to the horizontal, and the stifle and hock straightened. The horse will be in immense pain and can be reluctant to move. Horses with advanced stages of DSLD may not even move to reach food or water. Often horses will attempt to alleviate the pain in their legs by digging small holes and standing with their toes downward. This provides temporary relief by lessening the pressure placed on the fetlock joint. In many cases horses will spend a good deal of time lying down and moaning. In fact, several cases of DSLD have originally been mistaken for colic.

In order to accurately diagnose DSLD further tests should be performed by a veterinarian. An ultrasound can confirm the diagnosis be showing an enlargement of the body and branches of the suspensory ligament. A radiograph will reveal a dropping of the sesamoid bones in relation to the fetlock joint, and degenerative joint disease may be visible in the pastern joint. Examinations by a veterinarian are crucial to determining the extent of the injury and how well it is healing.

What is the Treatment and Prognosis for DSLD?

Unfortunately treatment for DSLD has more or less been limited to alleviating pain and making the afflicted horse more comfortable. Stall confinement for six months to one year is generally recommended along with pain medication, supportive leg wraps, shoeing techniques that raise the horse's heels, and proper stall footing. Also some feed supplementation containing methyl sulfonyl methane (MSM) has proven helpful in strengthening the suspensory ligament.

Unfortunately the long term prognosis for horses that develop DSLD is less than favorable. Because the disease is degenerative, treatment cannot ensure a return to previous athletic ability. Of course early detection greatly improves the prognosis but the progressive nature of the disease makes it difficult for the horse to fully recover. Intense observation and management of the afflicted horse is necessary for the horse to survive and be comfortable.

In conclusion, any injury to the suspensory ligament is frightening and signals long periods of recovery for the horse and DSLD is certainly not an exception. Because it has such a large genetic component it may not be preventable but supportive footing, early detection, and proper treatment by a veterinarian can help to extend the lives of horses predisposed to the disease. 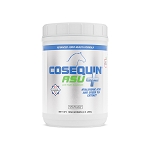 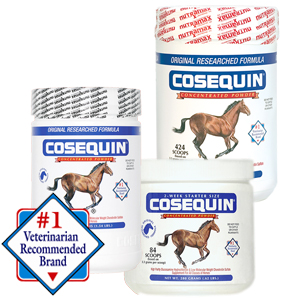 Cosequin Equine Powder
Your Price: $49.99
In Stock
The information contained in The Well Pet Post articles is not intended to replace a one-on-one relationship with a veterinarian and is not intended as medical advice. If you have a health con­cern about your pets, please consult with an appropriately-licensed veterinarian. Never dis­re­gard pro­fes­sional veterinary advice or delay in seek­ing it for your pets because of some­thing you have read on this blog or in any linked materials.