“Coccidiosis occurs more frequently in calves from one to six months of age but older cattle, especially those from one to two years, are often affected.”

Coccidiosis continues to be one of the major disease problems for cattle products. It is caused by microscopic one-celled parasites. Coccidiosis occurs more frequently in calves from one to six months of age but older cattle, especially those from one to two years, are often affected. Young calves are usually infected when they are placed in pastures or lots contaminated by older cattle or other infected calves. Occasionally mature cattle are infected when they are brought in from large pastures and crowded into small feedlots or barns.

Typical signs of coccidiosis are diarrhea, rough coat, loss of appetite, and general emaciation. The general weakness may cause the calf to defecate without lifting its tail thus soiling its tail and hindquarters. In severe cases, the manure may contain blood mucus and stringy masses of tissue.

Severe straining at defecation may be observed in the more advanced stages. Death may occur during the acute period or later from secondary complications such as pneumonia.

As in many diseases, it is easier to prevent coccidiosis than it is to treat it. Cocci-Guard is a powerful food additive to aid in the prevention of coccidiosis.

Since moisture favors the development of coccidiosis and dryness diminishes the development practices that reduce the moisture on pasture will decrease parasite contamination. Pastures should be well-drained, watering troughs should be elevated off the ground and grazing should be kept to a minimum on lush grasses.

Once a cow or calf has been diagnosed with coccidia one effective treatment option is to use Sulfadimethoxine. If it is more severe, animals will need supportive care such as fluids, external heat, and close monitoring. Additionally, animals contaminated should be segregated from the rest of the herd. Feeding practices should be followed even with ill cattle as the effects of parasites are less on well-nourished cattle. 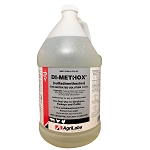 Rx Sulfadimethoxine 12.5% Oral Solution, Gallon
Your Price: $74.99
To order multiple quantities, contact customer service.
The information contained in The Well Pet Post articles is not intended to replace a one-on-one relationship with a veterinarian and is not intended as medical advice. If you have a health con­cern about your pets, please consult with an appropriately-licensed veterinarian. Never dis­re­gard pro­fes­sional veterinary advice or delay in seek­ing it for your pets because of some­thing you have read on this blog or in any linked materials.